Two pipe pits, el pozo auxiliar principal de la fosa, el tamaño es 5 metros de largo ? 8 metros de ancho ? 3.5 meters deep, the support method is steel sheet pile support, 5 steel sheets piled per meter, horizontal steel sheet pile Model 40B, 12 meters long. The depth of the work pit is planned to be buried 9 meters deep. In order to ensure the drying and reaming construction in the working pit, a mud sedimentation tank is arranged on the south side of the working pit, and a mud pump is arranged at the bottom of the tank to take the excess mud out of the pit at any time.

The good and bad drilling fluid plays a crucial role in the success of the pipe construction. The drilling fluid has a cooling drill bit, a lubricating drill, y lo que es más importante, can suspend and carry the cuttings, so that the mixed cuttings become flowing mud and smoothly drain out of the hole, which provides sufficient annular space for the returning pipeline, and Reduce the weight and resistance of the return line. The mud remaining in the pores can function as a retaining wall.

According to the previous construction experience, the pipeline sinks in the process of pulling the pipeline in the process of gravity. por lo tanto, in this project, the drilling point for guiding drilling is selected slightly higher than the center line of the design pipe. To reduce the impact of the pipe’s own weight on the elevation.

According to the geological conditions of the site, a scraper reamer is used. The size of the reamer is 1.2 Para 1.5 times the diameter of the pipe, which keeps the mud flowing smoothly and ensures the safe and smooth entry of the pipeline into the hole. 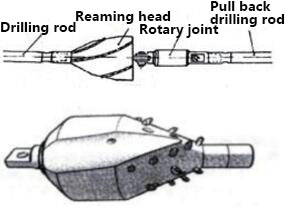 The distance between the reaming and reaming pipe is relatively long, and the mud effect is particularly important. The lack of mud in the hole will cause accidents such as collapse and cause the guiding drilling to lose its function and bury the hidden danger for re-drilling. Considering that the formation mud is more likely to be lost, after the mud is lost, the mud is lacking in the hole, and the friction between the drill pipe and the pipeline and the hole wall is increased, resulting in an increase in tensile force. por lo tanto, it is necessary to maintain “re-slurry” throughout the drilling process, and adjust the drilling fluid ratio to produce different muds in time according to changes in geological conditions.

Durante la construcción, water, bentonite, polymer, etcetera. are added to the mixing chamber, and the mixture is thoroughly stirred to form a drilling fluid. The drilling fluid is then pumped through the hollow drill pipe to the bottom hole drill by the drilling fluid pump and mixed with the drill cuttings in the hole to form a slurry flowing at the bottom of the hole. Since the working pit is located upstream of the pipeline, although the horizontal drilling is reaming, the mud in the downstream of the hole will not be lost too much. Al escariar, only the mud in the 2# pit mud pool needs to be replenished into the hole at any time through the drilling pumping system. The experimenter needs to check the proportion of each component in the mud at any time and adjust it in time, and recycle it repeatedly.

Durante la construcción, the operator of the pipe drawing machine should draw the pipe evenly and smoothly according to the equipment data, and must not pull hard.

(2)Move the pipe puller to the receiving pit, connect it to the ∮25 steel pipe and look back. For every 6m, the connection between the steel pipe and the pipe drawing machine is canceled and replaced with a high pressure grouting pump. Inject 1:1 cement and fly ash slurry (0.4MPa) to replace the thixotropic mud and replenish the void around the tube. Then change and pull again, then pull and re-note, repeat. Until the steel pipe is pulled out of the 1# receiving pit, the grouting process is all over.

(2)Long-distance remote emergency stop device, while drilling and tracking, the measure should always keep in touch with the rig operator, and should be disposed of in time if an accident occurs. En la actualidad, wireless communication is generally used, and sometimes it is impossible to cope with an emergency due to the influence of the local environment at that time. por lo tanto, during the construction, the drilling follower should use emergency measures to stop the drilling rig. After the treatment is completed, the latter can lift the drilling rig after releasing the restriction on the drilling rig.